21 Best Songs about Heroes and Superheroes 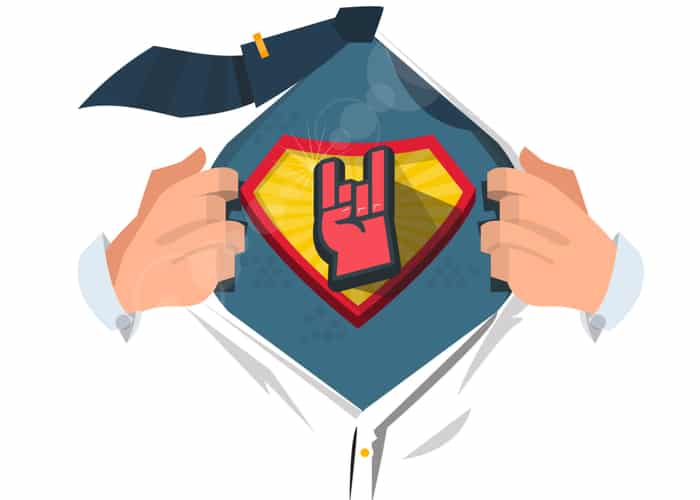 Here are some of the biggest songs about heroes that any Marvel or DC fan can add to their playlist to create an even more immersive superhero experience.

People have always had a fascination for superheroes that never seems to fade completely. This fixation is expressed in countless creative mediums – obviously, the comic books, cartoons, and movies are a huge part of these creative works.. But what about the iconic songs about heroes?

The titular track of Bowie’s 12th studio album, “Heroes” is still considered one of the eccentric rock legend’s most career-defining works – setting aside “Space Oddity” and “Changes.” Released in 1977, the song has no shortage of Bowie’s inscrutable lyrics, expressing his longing for the ability to swim “like dolphins can swim.” His inspiration came from seeing his producer-engineer locked in an embrace with his partner while standing next to the Berlin Wall, which led to the narrative idea of two lovers, each from opposite sides of the Wall. Its use in the film, The Perks of Being a Wallflower, led to a new wave of young rebels and free spirits taking it on as their own personal heroic anthem – even if they might not have a clue who David Bowie was, let alone how to properly pronounce his last name.

Next: Best songs about freedom and being free

Another song about superheroes that references the red-caped superhuman from planet Krypton, this track included the byline “Is it Gettin’ Heavy??” It’s as much about the idea of waiting around for heroic figures to come to the rescue as it is about the heroes themself. At the same time, it postulates whether there’s anything to heavy for even Superman himself to lift.

The legendary pop artist either formerly known as Prince, forever known as Prince, and sometimes only known as an indescribable symbol, did his part in contributing to the soundtrack of superheroes. “Batdance” was written for the 1989 Batman film and quickly topped the charts as the number one song in the US. Whether that’s due to Prince’s artistic genius or the widespread success of the caped crusader movie adaptation is eternally up for debate.

Next: Top songs about strength and not giving in

It’s not hard to guess which tights-wearing superhuman the Crash Test Dummies were inspired by with this tune. This Canadian folk-rock band achieved their first big hit with this song, reaching number four on the charts in their home county and 56 in the US. The track endeavors to tackle an analysis of political philosophy, comparing the left-wing political figure of Superman against the reclusive and society-rejecting Tarzan, while at the same time keeping it fairly lighthearted. Their hit single gained a substantial amount of recognition due to its use in the pilot of the TV series, Due South.

This parody of Billy Joel’s “Piano Man” is a hilarious tribute to your friendly neighborhood Spider-Man. It’s as laden with laughs as it is chocked full of fun details from Sam Raimi’s first Spider-Man movie, starring Tobey Maguire. By the end of it, you might be tempted to re-watch this classic superhero franchise. It might seem a bit quaint since it came before this new wave of superhero mania, predating the numerous new iterations of the New York teenage web-slinger that have become hard to keep track of.

Next: Best songs that tell a good story

No matter what you think of the band Nickelback, it’s hard to dispute that their lead singer’s installment to the superhero songbook is one that’s both memorable and iconic. Maybe it’s because the track was written specifically for the soundtrack of the 2002 Spider-Man movie, which will forever mark the start – or end – of a very specific era in superhero films.

This collaboration between Chad Kroeger and Josey Scott, the former lead singer of the band Saliva, is a passionate and intense expression of what it means to wait around for a hero to save us all. It’s a real who’s who of rock legends, featuring Mike Kroeger (the Nickelback bass player), Tyler Connolly (guitarist and lead singer from Theory of a Deadman), and Soundgarden drummer Matt Cameron. There’s even a version of the song with orchestral backing, creating an even more epic soundtrack to your heroic lifestyle.

Just as one might say there aren’t enough female superheroes, it’s hard to find enough superhero songs featuring female vigilantes. XTC filled that need in their ninth album, Skylarking, referencing the DC character in this track. However, the band has stated that the Supergirl character is really meant to be an amalgam of all women everywhere.

In 1975, this former Beatle and one of his most popular post-Fab-Four bands added their name to the list of superhero songwriters. The lyrics are highly narrative, referencing in no uncertain way the Marvel characters of Crimson Dynamo, Magneto, and Titanium Man. Even legendary artist and creator Stan Lee gave the song his stamp of approval, so that should be good enough for anyone.

The Traits with Roy Head created a song that sheds some sympathetic light on the mean, green fighting machine. What makes this song all the more impressive is that it was initially sold exclusively through advertisements tucked in the back of Marvel’s comic books. The fact that people still remember this song today is a mark of the perfection in songwriting and comic book character references.

Next: Top songs about fighting

No one can remember the ’90s without hearing the Spin Doctors at least playing faintly in the background. Many people don’t realize that they had their hand in the superhero songwriting world, which might be more obvious if you think about the title of their album, Pocket Full of Kryptonite. “Jimmy Olsen’s Blues” is a bit more of a subtle reference to the world of Superman, telling the story of a depressed photographer at the Daily Planet who feels overshadowed by his coworkers: none other than Lois Lane and Clark Kent.

Next: Top songs about pain, hurting and suffering

From his debut album, Nine Track Mind, Charlie Puth came out with his gospel-pop fusion in 2015 to provide a unique take on superheroes. One of the major elements of being a hero is the ability to show up at the drop of a hat, and that’s what resulted from Puth’s work as a result of a songwriting camp put together by his record label. In that sense, his heroic endeavor to write a catchy and original superhero song was truly only “one call away.”

Next: Top gospel songs of all time

Alternative rock band Jane’s Addiction included their own take on what’s possible in a superhero song when they released their third album, Strays, in 2003. Like many of Jane’s Addiction songs, the lyrics can be interpreted numerous ways, but references to brick and stone being unable to hurt the singer and madman running around the city depict clear images of the comic book characters we know and love.

It was famously asserted in the Disney film The Incredibles that superheroes donning capes might not be the safest or most practical thing in the world, but that’s not what Owl City was referring to in their superhero song. This tune was actually a tribute to Adam Young’s father, shedding light on the heroic capabilities of everyday people even though they don’t have any superpowers.

Next: Best songs about family ever made

Who doesn’t wish they could fly the way that Superman does? Clearly, the Kinks shared in this desire, but their song also says so much more. Beyond just wanting the type of powers that Superman has, their song depicts the very human wish to change the way you are, with the character in the song fixated on how feeble he is.

Not afraid of being a contrarian, Tina Turner boldly states the downside of heroics in this epic 1985 song. Many people will recognize it from the gritty post-apocalyptic movie Beyond Thunderdome from the Mad Max franchise. It’s a power ballad with a music video that features Turner in the heavy chain mail gown that she donned as her role of Aunty Entity – definitely worth viewing!

If anyone ever said that Snoop only writes songs about one thing, here’s a track you can easily point to and prove them wrong. Snoop Dogg put down the herb for long enough to collaborate on an interesting and highly unique take on the caped crusader and his intrepid sidekick. In the track, Snoop plays the role of Batman – of course – and The Lady of Rage portrays Robin. RBX is even briefly in the mix, taking on the role of Commissioner X. Besides the great references to number Batman names and locations, there are even samples from the original Batman TV Show, making it an endless ride of nostalgia.

Next: Best reggae songs of all time

No one can argue that the famous web-slinger is not without his inner conflicts. The Black Lips explore Peter Parker’s troubled past, present, and future in their signature gritty fashion. In the song, they reference how Parker’s life is much darker and more complex than it initially appears. What might be seen by some as a gift can also equally be viewed as a curse that Spider-Man is endowed with against his will. It’s always interesting to explore the darker side of superheroes, and the Black Lips are the perfect band to do so.

Another great representation of the iconic female superheroes, “Wonder Woman” came out as part of the debut album from Lion Babe, an American due, in 2016. The song is full of empowerment and specific references to Wonder Woman that are difficult to miss. With lines like “I ain’t gonna break for that, I’m a Wonder Woman (watch out!)” it’s the perfect thing for anyone who needs to feel a little more power in their life to put on their workout playlist or to help them get pumped up for a big day.

Next: Best workout songs of all time

Yet another installment to the Superman-focused songs, 3 Doors Down takes a bit of a more metaphorical approach. The lyrics are more about the character’s lover or loved one seeing him as a Superman-type figure, using the iconic element of Kryptonite as a metaphor for the character’s only weakness. It’s a perfect song for anyone professing their undying devotion to a certain special someone while still instilling their passion for superhuman heroics. This is truly one of the best songs with strong figurative language usage.

Here’s a creative ode to the ones who always seem to get so much less love than their more powerful heroic counterparts. The punk rock ska outfit put out this song on their second studio album, Let’s Go. It tells the story of a man who dreams of being a sidekick to a masked vigilante, being a “lesser-known character.”

This is a song about superheroes that moves more in the direction of honoring those who perform everyday deeds to make the world a better place. The ’90s and early 2000s hit band released this song on their sixth studio album, Summer Girl. The track was featured in the soundtrack of the movies Zoom and The Pacifier. It was also part of the advertising campaign for the sitcom, The King of Queens.

That rounds out our list of the best songs about heroes (and superheroes). Did we miss out on any that should’ve been included?

Best songs about dreams and dreaming ever made

Best songs about magic and the supernatural

Greatest sad songs ever made

Best Disney songs ever made