How to Hold a Guitar Pick

By Liam Flynn
Last Updated On: May 8, 2021
TwitterFacebookPinterest

Knowing how to hold a guitar pick is an essential skill you need before you begin to play, but did you know that multiple styles exist that allow you to play the instrument differently? If you already know how to play the guitar, then you know what a guitar pick is, but these small accessories allow you greater control over your instrument so you can develop your playing style.

Many individuals who are new to the guitar will ask if a pick is really necessary for playing, and the short answer is no. If you look at some guitarists from all over the world, you'll see that some of them use picks while others use their fingers. One thing that is consistent with all of these players is that they each have a unique playing style, and that style may require the use of a pick either sometimes or all of the time.

There are many ways to play the guitar and several variations to picking. When you start out, it's best to worry less about how you use the pick and instead work your way through improving how you play the guitar to encourage you to develop your own style.

There are a few approaches to picking:

It's important to note that while there are times when not using a pick is far more natural, there are also things that you can only do on a guitar while using a pick. Those that use a pick have the name "flatpickers," and those who do not use a pick are called "fingerpickers." A hybrid pick technique uses flatpicking and other fingerpicking methods and may also include a thumb pick.

Flatpicking and fingerpicking are the two main ways you will play the guitar, and the pick you will use is less commonly called a plectrum. Plectrums come in a variety of thicknesses and types for altering the sound of your guitar as you play, and allows you to play notes in rapid succession that may otherwise be impossible with your fingertips.

Flatpickers may use a conventional pick or a thumbpick to help them play different notes. The increase in dexterity allows for a more significant variation in the notes that a musician can play, and it can also allow you to produce sounds not easily made using only your fingers.

Hybrid picking is useful when creating a chord in combination with the fretting hand. When you hold your pick in your picking hand, you can use it to strum the bass note while using your fingers for the other notes as appropriate.

Getting hybrid picking down will take some practice, but it can be a useful method for creating more-complex chord progressions and adding a particular bit of flair to your playing style. You'll likely need to practice extra patience with your pinky to get it working well using this method, but once you have that finger trained, you'll have greater dexterity that is useful in many situations.

A Note on Flatpicking

The primary benefit of flatpicking is that you gain dexterity while also changing the tone of the note and the overall volume produced. For many guitarists, these are desirable outcomes, and a pick makes it easier for them to reliably play notes or arpeggios.

However, there is a reason not to use a pick, and that reason is that it can be easier to play specific chords or patterned notes at the same time. Ditching the pick also allows you to play multiple parts such as the melody of a song and the bass line simultaneously for a more cohesive sound.

Check Out: My Reviews of the Best Bass Guitars

How to Hold Your Guitar Pick

There are some strong opinions about how to hold a pick, but most of the time, you can use your intuition to get started and make adjustments to your grip as you go along. With that said, it's often best to have some idea of the many ways a pick can fit your hand so you can decide what will work for the music you're about to play in advance. 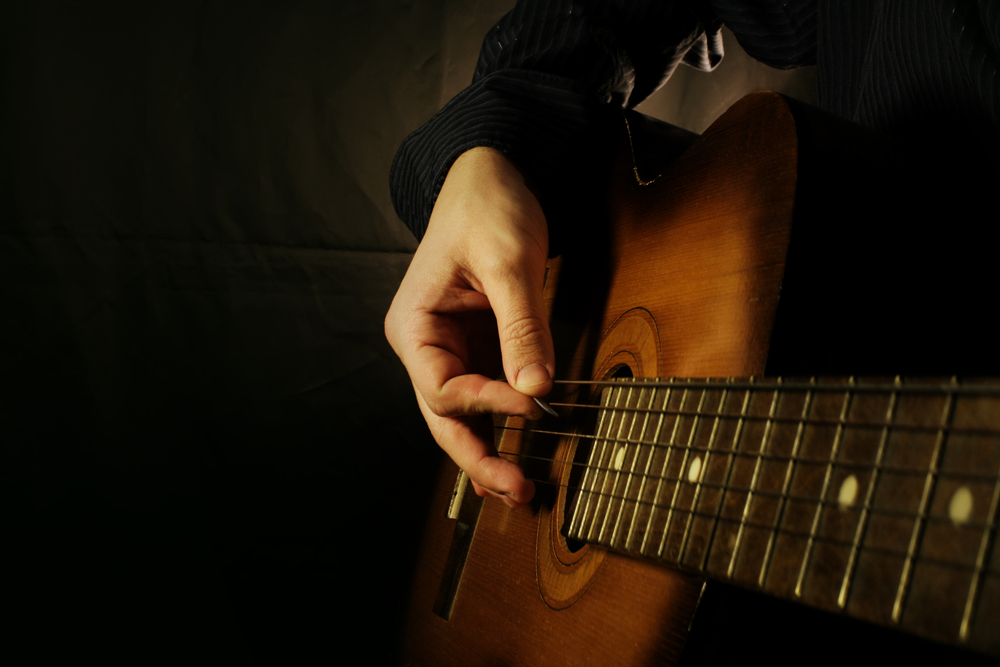 Three fingers can also be used similarly with the middle finger, offering some stability. This position decreases your ability to maneuver your pick accurately and isn't highly recommended. It does provide more stability than using two fingers, though, and is a trick used by some notable guitar players like Eddie Van Halen.

Angled Towards or Away from the Neck

Angling your pick towards the neck will soften the sound that it makes by changing the surface that hits the strings. By angling the pick away from the neck, you'll get a sharper tone, but this position is often very awkward for guitar players.

Choked Up or Back

Twisted Up or Down

Twisting the pick in relation to the string is one way of decreasing the resistance between the string and the pick and, in theory, makes the guitar more comfortable to play. Holding the pick twisted either up or down will make it easier to play notes in one direction or another.

Many country and bluegrass artists use the pick without angling it to either direction in relation to the string, which is called "flat." This technique is challenging to use, but it does provide clearly defined tones with good volume for genres like jazz, country, and bluegrass.

Tilted Up or Down

Tilting your pick is a more advanced move, but it does make it easier to engage in sweep picking or economy picking when the music requires it. Some musicians will alternate how they tip their pick, so it's easier to sweep across the strings in a given direction.

How you grip your pick changes what techniques will be easier to use as you play, and also impacts your ability to strum the guitar. Tight grips make it easier to play precise groups of notes while loose grips favor sweep picking. Many players alternate their grip to achieve different sounds and notes, which you can only pick up through practice.

Further Reading: How to Hold Your Guitar (Proper Posture & Positioning)

The Importance of Holding Your Pick Correctly

Holding your pick can do a few things to benefit your skill and your overall sound. First, how you hold the guitar pick can influence the instrument's feel and how you connect to it as you play. Your method for holding the pick will also impact your technique and your physical positioning while playing. If you're struggling with holding the guitar in place, consider a guitar suited for smaller hands.

When developing your preferred technique for playing the guitar, it's best to have a few options for holding the pick at your disposal so you can try a few until you find the most comfortable one. Players who play different types of music will tend to hold their picks in specific ways, but there is a bit of variety between the preferences of guitar players.

The way you hold the pick will also change the tone of the note, and you can demonstrate this for yourself by playing the same note while holding the pick in various positions. Acoustic guitars are especially sensitive to how the pick strikes the string in different ways, and you'll also notice changes to the volume based on where the pick hits the string.

Although there are many different ways to hold a guitar pick, there is no definitive right way to hold one that will work for all situations. It's good to have a few different positions at your disposal as you practice your instrument so you can experiment with what positions work best and how they change the sound of your playing. You can actually make your own guitar pick too, which is a really neat way to bring some personality to your playing.

If you watch accomplished guitarists play, you'll see that many of them alternate how they hold their pick throughout their performances, and this changes several factors about how the guitar sounds and how the strings feel beneath their hands.

Keep in mind that the two-finger grip is the most recommended way to hold your pick, so it's a good idea to start there and branch out as you practice.

Learn to Tune Your Guitar Effortlessly

As the Head Editor at Music Grotto, Liam edits content produced from over 30 professional music/media journalists and contributing writers. He works closely with journalists and other staff to format and publish music content for the Music Grotto website. Liam is also the founding member of Music Grotto and is passionate in disseminating editorial content to its readers.