How to Tune a Guitar

Whether playing your guitar alone at home or in front of a crowd, you want to sound your best. Unfortunately, the quickest way to ruin the music is by playing guitar that's out of tune.

I used to have the worst time tuning my guitar. I'd know something was off with the sound, but often had difficulty getting it in tune. Even electronic tuners didn't help much because I didn't understand the underlying idea of how they worked. I also was using a cheaper, beginner acoustic guitar that had more difficulty actually staying tuned!

I knew my inability to properly tune a guitar had a negative effect on my playing, so I became determined to learn. Fortunately, I figured it out. When first learning guitar this can be a major problem. If you're having the same problem, I'm here to help. Here's everything you need to know about how to tune a guitar:

What Does Tuning Mean?

Let's start with the basics.

Tuning is the process of adjusting your instrument, so it plays at the correct pitch. Pitch refers to how high or low a tone sounds. For example, a soprano singer produces a high pitch; a bass singer creates a lot of pitch. 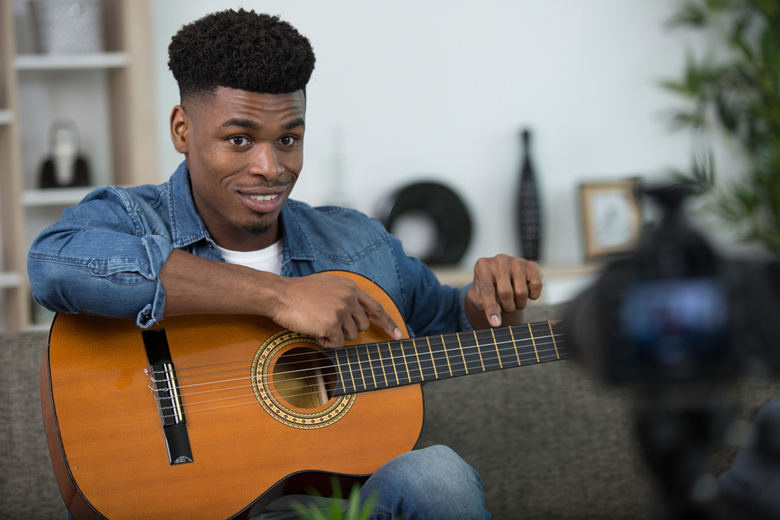 Even if you don't know quite what they mean, you're probably familiar with the terms "sharp" and "flat." They relate to variances in pitch:

Getting your guitar in tune is absolutely essential, any luthier or guitar tech will tell you that learning to tune your guitar is vital to your sound. Learn this important skill early in your guitar journey so it's never a hassle to get your guitar perfectly in tune down the line.

How to Tell if a Guitar is Tuned Correctly

When a guitar is tuned properly, it sounds right. While that’s a vague description, it's easy to hear. Strumming all the strings on a guitar in tune results in a pleasant, natural cascade of tones.

If the guitar is out-of-tune, one note (or more) will sound out-of-place. It'll grate against the ear.

To tune a guitar, you tighten or loosen the strings, which raises or lowers the tone.

Here's the order for the six guitar strings on a standard guitar:

The physical act of tuning is fairly simple. You turn the tuning key on the neck of the guitar to adjust the corresponding string's tension.

However, you always want to make sure that you're adjusting the right tuning key. For example, if you want to adjust the G string, make sure you're turning the G tuning key.

It sounds straightforward, but it's an easy mistake to make, especially if you're a beginner. If you turn the wrong key, the string you want to tune won't sound any different, resulting in you tuning the wrong key even more. It's a common way to break a string, so always double-check before turning the key.

Have a bass guitar? Learn to tune the bass here.

Another common way to break a string is by overturning it. As a general rule, if you think you're tuning the string too far, stop right away. Turn the key in the opposite direction to release tension, and start over.

You'll eventually learn how much adjustment is required to make the note higher or lower. Practice tuning your guitar, and you'll develop a feel for what's right.

How to Tune with an Electric Tuner

An electric tuner is the easiest way to tune a guitar because it does everything for you. The tuner reads the sound waves from your guitar and displays whether the note is true, too high, or too low.

You can find two types of electric tuners. Physical tuners are typically small devices about the size of your palm. You can also find apps that emulate the look and functionality of a physical tuner.

On the downside, electric tuners typically require batteries. Plus, you have to make sure you have one whenever you want to play guitar. Also, high-quality tuners can be expensive (although apps can be considerably cheaper).

How to Tune a Guitar by Ear

Tuning by ear doesn't require any special equipment. Once you know how to do it, it's usually quicker and easier than using an electric tuner. The most popular way to tune a guitar is commonly called the 5th Fret method.

Here's how to do it:

First, the guitar must already have the low E string in tune. You can use an electric tuner, app, or another instrument to tune this string properly.

Quick tip: The fifth fret is five frets counting up the guitar towards the body.

Next, pluck the fifth string without holding down any frets. The fifth string, when no frets are held, is called an open A. It should sound exactly like the note on the fifth fret of the E string. Adjust the key until it does.

You then adjust the G string using the same method, by comparing the open string to the fifth fret of the D string.

Next, you want to tune the B string. It's slightly different. You need to match the open B string to the fourth (not the fifth) fret of the G string.

Finally, you tune the high E string by matching it to the fifth fret of the B string.

Consider Next: The Best Overall Guitars for Small Hands

Tuning a guitar used to feel like a complete mystery to me, but now I can tune by ear quickly and easily – and you can, too!

The first few times might feel confusing, but with practice, you'll get it quickly. Use the tips above to keep your guitar in tune and take your playing to a whole new level.

Learn How to Hold Your Guitar Pick Today

How to tune a 12 string guitar