The Bm chord is one of the most challenging chords for guitar players to master. The traditional technique requires tricky finger placement for beginners. When I first learned to play guitar, I struggled with orienting my fingers correctly.

No matter how I approached the chord, it was impossible to play. Then, I discovered a handful of modifications to play B minor with ease.

In this lesson on the B Minor guitar chord, you will learn several strategies to play the Bm chord effectively. We will go over:

You may be wondering why the Bm chord is so complicated to play. When you look up B minor, you will see what resembles a “barre” fretting several strings – this is a barre chord. Unlike more accessible notes, you play barre chords by flattening your knuckle over a few while simultaneously holding down your fingertips over others.

Keeping track of all these fingers presents a lot of issues for the novice guitarist. Hence, many beginners struggle to play this kind of chord.

Other kinds of basic guitar chords featuring barre-ing are the C minor and G minor. The B minor is perhaps the most straightforward barre chord to start with, though it still takes time to adjust to, particularly if you are trying to switch chords quickly.

The G minor is far more comfortable than the C minor, but both present difficulties for beginners, so don’t feel defeated if you don’t get them on the first try.

Since there are a variety of ways to play Bm, we recommend you try each of the options below to find which method you are most comfortable with, and progress to the barre chord as you improve your skills.

Further Reading: Learning to Play Guitar as a Beginner

The “Right” Way to Play B Minor 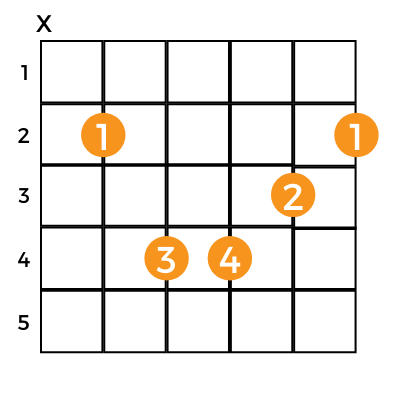 The traditional way to play B minor is with the barre chord. It is the most convoluted version to master but will produce the best sound. To play, place the tip of your index finger on the fifth string and flatten your knuckle along to the first. The suppressed group creates the barre, and it covers the A, D, G, B, and E strings. You do not utilize low E for the Bm chord.

Ensure your fingers have a decent arch in them to prevent a muddy sound. Test this by strumming the guitar, making any necessary adjustments. Arching your fingers will prevent you from muting any other strings because you will play from the fingertips. Furthermore, keep your fingers just behind the frets rather than on top of them.

Finally, avoid strumming the sixth string to make the perfect Bm chord. If the note still sounds off, try tuning the guitar to improve the quality.

Congratulations! You have just played your first barre chord. You’ve completed your first step in the quest for a perfect Bm Chord.

Barre chords demand an intermediate skill level, so you’re well on your way to becoming a pro. If you still struggle to play B minor, don’t worry: there are plenty of alternatives to the barre chord. It takes a lot of finger strength to quickly and accurately play this chord, so don’t worry if you’re not there just yet.

The Easy Way to Play B Minor 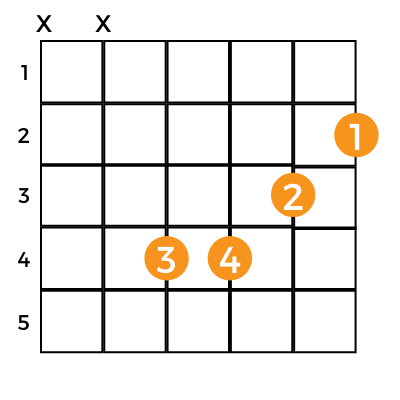 The first alternative to the Bm chord keeps your fingers in about the same positions, minus the barre. It maintains a full sound, though it is not an actual B minor. Nevertheless, it poses a relatively easy way to start learning B minor. You’ll notice this chord is similar to it’s major counterpart, the B chord.

This version of Bm is slightly easier for beginners, but it is still too intricate for most. It would help if you worked towards this Bm, but you can utilize an even easier strategy until you are comfortable enough to try a more legitimate chord.

If this approach seems impossible to achieve, check that you are holding your guitar correctly. Any imbalances or inconsistencies will hinder you in reaching your full guitarist potential.

An Easier Way to Play B Minor

The third strategy for playing B minor requires just three fingers as opposed to the usual four. This method produces a satisfying sound while not straining your fingers. 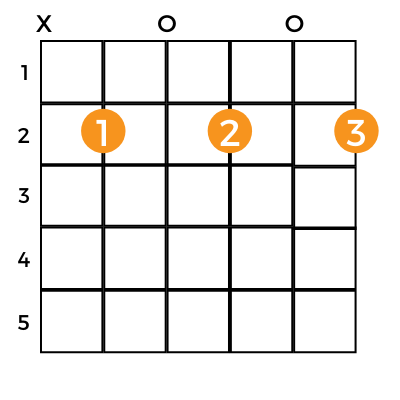 You may notice that this version is very similar to the previous one, but you exclude the pinky and allow the ring finger to take its place. The sound is not as full as the prior method, but it is close enough to the actual B minor sound for the average listener not to notice.

As always, arch your fingers and keep them behind the frets to avoid muting strings and making a muddy sound. Building up finger strength is imperative to being a phenomenal guitar player.

An Even Easier Way to Play B Minor

If the above versions stretched your skills a little too far, we have another way to produce a Bm chord – the Bm7. While not precisely B minor, it is a variant in the seventh scale degree. This variance gives the Bm7 a different tonal quality to the Bm. Regardless, it will lead you on your way to playing the traditional B minor.

Make sure solely your fingertips are on the strings and right behind the frets to optimize the sound. Since this chord has a different tonal quality than the regular Bm, be careful when substituting with it in songs. Try it out first to see if it negatively impacts the sound of the song or seamlessly slips in.

The Absolute Easiest Way to Play B Minor

If that wasn’t simple enough, we have the absolute easiest way to play B minor. So easy, that it only requires two fingers. While not as closely related to Bm as the Bm7 chord, it lies in the same ballpark. 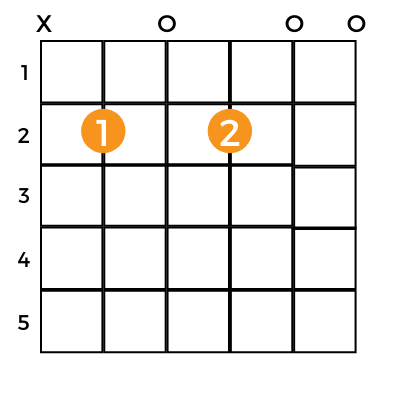 As usual, keep only your fingertips on the string and maintain their position behind the frets. Be warned: while this chord is a super easy alternative to playing B minor, its sound is somewhat distant from the actual note. You can begin here, but work your way up to more sophisticated methods to drastically improve the sound of your music.

If you are starting your Bm chord journey at this point, you are probably just beginning. To rapidly improve when learning to play the guitar, look into some tips about holding, strumming, picking, and positioning your guitar to progress your technique quickly.

Try Next: Mastering the A Guitar Chord

Braving the Bm Chord – B Minor Guitar Chord as a Beginner

When learning the B minor guitar chord, don’t just settle for one of the alternatives. You can start there, but it’s crucial to progress to become a fantastic guitarist. By practicing for only a few minutes a day, your skills will improve exponentially. It will take a lot of trial and error to avoid strumming the sixth string and get your fingers in the right orientation, but remember never to give up.

The Best Guitars to Play if You Have Small Hands

Is it Good? Guitar Tricks Review

Try out B Flat (Bb Chord)

Liam’s lifelong love for music makes his role at Music Grotto such a rewarding one. He loves researching, writing and editing music content for Music Grotto.