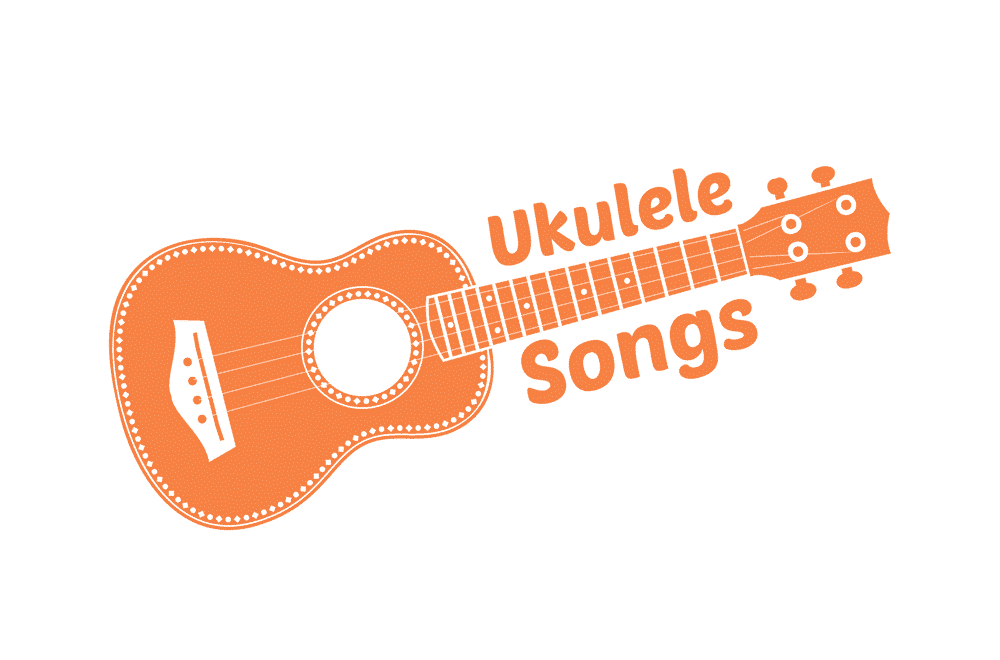 The ukulele is becoming popular for many reasons: the smooth and mellow sound, relative simplicity, and incredible portability. When you start to learn an instrument, you want to play songs with it. This list of seventeen easy ukulele songs will help get you started building a playlist of great music you can jam to.

Originating in Europe but famous in Hawai’i, the ukulele has four nylon strings that don’t hurt the fingers to press (unlike most guitars). It’s an instrument that is easy to learn, versatile, and enjoyable to play.

Ukulele chords are straightforward to learn. All you need is a simple chord chart and a ukulele to begin playing your favorite songs. The easiest chords are in the key of C major – C, F, G, and A minor.

Once you’ve learned the chords in this key, you’ll be able to play more songs than you ever thought possible! Most pop and rock songs follow a simple three or four-chord pattern, so you can play them after only learning a few chords.

As you learn to play these chords, you might find that you struggle to sing along. It’s either too high or low for songs in the key of C, but don’t worry. If you’re a beginner taking some online ukulele lessons to learn, you can use a capo to adjust the key without learning four new chords.

You can use these four basic chords to play all of the songs on this list. If they are in different keys, you can use a transposing tool to change them to your key. Even if you only learn the four chords in the key of C, you will be able to play these seventeen songs!

Counting Stars by OneRepublic seems like it would be a hard song to learn. However, it’s pretty easy, with only four chords (and an optional fifth if you want to get fancy). The timing is simple and only involves down strums.

This song is originally the key of C, so you won’t have to worry about using a capo or transposing the music to fit the chords you already know. Once you learn the basic chords for Counting Stars, you can sing along and have friends join you!

One of the iconic songs of the past century, Hallelujah by Leonard Cohen, has been played on all instruments imaginable and covered countless times. The song is famous for its soulful lyrics and memorable melody.

Hallelujah features the four common chords in C major without transposing the song or adding extra chords. It’s a slow and straightforward song, making it easily accessible to beginners. If you want an easy piece that showcases your voice, learn Hallelujah to play and sing a classic.

This choice is a little more complex than some others on this list because of its speed. However, the light and fun tone of Hey Soul Sister lends itself to the airy sounds of the ukulele, and it only has the four chords in the key of C.

If you can learn the chords, you won’t have a problem playing Hey Soul Sister by Train. Listen to the audio track as you play for timing, and make sure to practice your chord transitions regularly.

The Lumineers are famous for their simple chords that make complex sounds. In Ho Hey, they layer many instruments to make the song sound complicated, but it’s straightforward to learn. You can play this song with a ukulele and still master it.

Ho Hey is a song that only uses the four chords in C major but has an optional G suspended chord. If you aren’t comfortable playing the fifth chord, don’t worry! Play it like it’s a regular G chord, and you’ll barely be able to tell the difference.

One of the more iconic ukulele songs of the past few decades, I’m Yours by Jason Mraz, is easy to learn and play. Sometimes it can be challenging to adapt a song to the ukulele when originally recorded on another instrument, but that’s not the case with this song!

I’m Yours sounds excellent on the ukulele because it was designed for this instrument. It features the four chords in C major with one added extra (but sounds just fine if you decide to skip the fifth chord). The strumming is easy as well.

Although it’s originally in the key of D, you can easily transpose the three chords down one key to C major! Bruno Mars has a higher voice than most people learning this song, so transposing down will help you if you want to sing along.

John Denver doesn’t sound like the kind of artist who would translate well to the ukulele. The music giant has written several anthems of country music. However, once Leaving on a Jet Plane is stripped down to its basics, it becomes a simple song for instrument and voice.

Leaving on a Jet Plane only has three chords but is in the key of G. How you play this song depends on your vocal range – if it’s way too high or low, you can transpose the song several steps to C or use a capo. However, it only takes one new chord to play it in G, so don’t be afraid to branch out!

When you find yourself struggling to find a song to learn, don’t forget about the Beatles. They have hundreds of easy songs. One of the most iconic pieces by the Beatles is Let It Be. It’s only a few chords and remarkably easy to learn and play.

If you’ve heard enough of Let It Be, another simple Beatles song is Octopus’s Garden. This song works well with the ukulele and can be a unique addition to your musical repertoire! Either way, you can learn some iconic music on the ukulele.

Justin Bieber made it big with hits like “Baby” but has shown his maturity with “Love Yourself.” It’s a simple song to learn and extremely fun to play. Don’t worry about the beat – once you’ve played it a few times, you’ll catch on quickly!

Love Yourself uses the chords in the key of C with one addition – D minor. This chord is necessary for playing in many other keys on the ukulele and is relatively easy to learn. Most of the song stays in the same four chords we’ve learned.

Read next: Our list of the best songs with the word baby in the title.

Bob Marley’s reggae style is distinct for its beats and peaceful lyrics. This time signature and relaxed feel are great for ukulele players. If you want an introduction to reggae on the ukulele, One Love is an excellent place to start.

One Love has a simple reggae beat and is in the key of C. Although several versions online have more than four chords, you don’t need to use them. If you want a more complicated version of the song, you can, but don’t worry about playing One Love with more than the chords you’ve already learned!

Read next: The best reggae songs ever created

11) Over the Rainbow – Israel Kamakawiwo’ole

Over the Rainbow has a few more chords than the key of C, but they add to the nostalgic and charming sound. You’ll have to put a little more effort into learning this song, but it’s an iconic piece of ukulele music and worth the work.

Riptide by Vance Joy is a popular ukulele song option for its easy four-chord structure and uncomplicated rhythm. It uses the common chords in the key of C and has several how-to-play videos on Youtube available!

If you see an F major seventh chord instead of an F major chord, don’t let that scare you! You can go out of your way to learn the major-seventh version, but it will sound pretty much the same with a regular F major chord.

Ukulele songs are generally bright and happy to match the airy sound of the nylon strings. However, musicians use ukuleles for more melancholy songs as well. Adele is a master of using simple chords as a backdrop for her powerful voice.

Someone Like You uses five chords, adding a D minor chord if you play it in the key of C. The timing is easy. Any beginning ukulele player can pick up this song and host an immediate singalong.

Stand By Me is a classic song with a simple beat. It’s great for any beginning instrument player but works exceptionally well with the ukulele! If you want a piece that’s easy to learn and sing along with, you can’t go wrong with Ben King!

Stand By Me is initially in the key of G (the second most accessible key to learn), but you can transpose it to C if you don’t know the chords yet. Either way, you’ll be able to play a classic song with very little work if you learn Stand By Me.

Ingrid Michaelson is a pop star for her variety of sounds and song styles. She is proficient on many instruments, and the ukulele is no exception to this! Although Ingrid has several songs performed on the ukulele, her easiest one (and a very fun duet) is You and I.

16) You are My Sunshine – Traditional

You are My Sunshine is a song that everyone knows and can sing along to. Like most traditional songs, it’s super simple and only has a few chords. You’ll be able to learn this song in no time and bring your ukulele to the next bonfire singalong!

This song is entertaining to play around with once you’ve mastered it. You can play it fast,  slow, or switch up the style to suit your own. You are My Sunshine is one of the most straightforward ukulele songs to learn and makes for great jamming!

You’re Beautiful by James Blunt is a great song, sad and sweet and lovely. It’s easy to learn and play on the ukulele! With the chords you have so far, you can pick up You’re Beautiful in just a few minutes.

Many of the chord versions found online make this song seem more complicated than it is. Remember, you can play a major seventh chord and a chord with an added note (like Cadd9) as the regular chord. Don’t let a complicated chord chart fool you; you can play the song with four chords in most cases!

A Note On Strum Patterns

As you play through some of these songs, you might notice that they sound different from the recordings. This is generally because the strumming patterns vary with the timing and mood of the music itself. If you are struggling with strumming patterns, don’t worry! They are challenging when you’re only beginning to play the ukulele.

While you can play a song without the proper strumming patterns, learning these will make your version of the song sound more like the original. Playing music isn’t just about learning chords – it’s just as important to learn the timing, dynamics, and strum patterns of the song as well.

It’s perfectly fine to begin learning songs by simply strumming down in time to the music. Keeping up with the essential time signature of the song is a great place to start. From there, you can look up the specific strums and begin to learn them.

To start learning the ukulele, all you need are four simple chords. With these under your belt, you’ll be able to play the classics on this list and many other four-chord songs. Mastering songs on the ukulele isn’t as far out of reach as it may seem. Odds are, your favorite pop song is easier to play than you think!